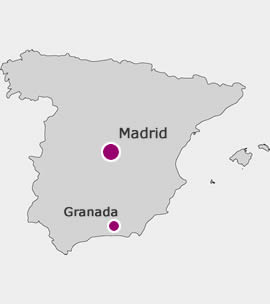 Our Spanish language school is located in the very centre of Granada. The historical building of the school has been recently renovated. There are three floors and a terrace with a panoramic view over the centre of Granada. On the 2nd and 3rd floors there are fully-equipped apartments with kitchen, washing machine, sitting room, TVs, bathrooms and numerous bedrooms (free wireless internet access is also available).

On the first floor there are some classrooms and a computer lab with free internet connection. On the ground floor is the language school office, the library, other classrooms and a patio where the students meet for their activities. Take advantage of the free Internet access and wireless connection and enjoy the library filled with books, films and spanish music.

All teachers are native Spanish speakers and are committed to providing first-class Spanish courses.

Granda is a huge historical monument itself. The famous La Alhambra is a UNESCO Worlds Heritage Site. Whole areas of the city are admitted as a cultural property by UNESCO. Among the most visited monuments of Granada you’ll find The Cathedral of Granada, The Royal Chapel, The Charterhouse, The Monastery San Jeronimo.

Granada has played an important role in the history of Spain. One of the most impressive monuments La Alhambra was constructed during the centuries of the arab dominance. Romans and  arabs left their marks on the architecture and culture. Later Granada was conquered by The Catholic Monarchs and the new chapter in Granada’s history began.

Granada has lots to offer: various barrios with their history and unique atmosphere. Apart from that, Granada has an ideal geographical location. You can enjoy hiking or even skiing in the mountains or you can go to the Costa Tropical and spend your day on the beach.

All-year-round there are fiestas and cultural activities as well as music and dance concerts. Everyone will find something interesting here! One of the most famous festivals is Semana Santa which is celebrated non-stop for one week.

Granada is an incredibly beautiful town in the heart of Andalucía. It is situated about 45min to the north from lovely beaches of the "Costa Tropical". Right at the base of Sierra Nevada, Granada is definitely one of the most beautiful cities Spain has to offer.
La Alhambra is without a doubt what people associate with Granada, but the city has way more to offer. One of its most distinct features is the Albaycin, the old arab part of town, with its cobbled and narrow streets with the typical labyrinthic arabic structure and white-chalked houses. Walk up the streets of the Albaycin until you get to the popular square of San Juan de los Reyes where you can gaze at La Alhambra with the snow-clad mountains of Sierra Nevada behind it. There are lots of viewpoints in Albaicín with a breathtaking view of La Alhambra. You’ll also find small squares with fountains and hidden gardens. Or you might prefer to visit Sacromonte where the gypsies live, the heart of Flamenco, with its caves and unique atmosphere. You’ll also enjoy to stay down at the foot of the hills, go out and buy a cerveza in any tapas bar around Plaza Nueva and be pleasently surprised by the great (free!) tapas that accompany your beverage.

Granada apparently has the largest amount of bars per inhabitant in Spain (which means there must be a lot, as the Spanish usually spend more time in the local bar than at home!), and most of them are usually full of chattering and friendly Spaniards, who will be happy to talk to you for hours if you wish to do so. The local fiestas are as frequent as they are fun, there is always at least one "barrio-fiesta" (street party in a close-by neighbourhood) going on, with concerts, fun fairs and more opportunities to try all that great Spanish food and to practice Spanish.

20 lessons a week, 45 minutes each, Monday to Friday

All the studying material is provided

The number of students is between 2 and 8

It is usually possible to change your level during the course

Even if the minimum number of the participants is not reached, the class will take place, but the time of the class will be decreased. We ask you to complete the Spanish level test one week before the beginning of your course. It will help us to determine the best appropriate level for you.

Duration: from 1 week to 12 months

All levels, from absolute beginner (A1) to proficient (C2)

Even if the minimum number of the participants is not reached, the class will take place, but the time of the class will be decreased. We ask you to complete the Spanish level test one week before the beginning of your course. It will help us to determine the best appropriate level for you.

Standard course, internship in a hotel with accommodation included

The course consists of:

When you finish studying in the school you will take up an internship in a hotel in Granada, living in a flat with students. The internship can be carried out in different areas depending on your personal interests and level of Spanish: reception, restaurant, reservations department, entertainers. During your internship, the hotel will offer you a meal per day. After finishing it,  you will receive a certificate. You won´t be paid, but sometimes it is possible to agree a premium, depending on the contribution to the company.

Ideal for people who want to submerge themselves in a working environment in Spain in order to improve their language to a professional level. Taking part in the internship is a key link between studying and the workplace. It is important to be able to work in another country, in another language.

Timetable: 5 days a week, 4 hours a day, in the morning or afternoon The hotel offers food once a day: breakfast, lunch or dinner, depednding on the day of the week. All of the hotels are at least 3*

If you want to go to a Spanish University, this course will help to prepare all the subjects over 5 months.

the preparation classes for Selectividad are shared in groups

The activity programme will be an important part of your stay in Granada. Through these organised activities you will get a deep insight into the Spanish way of life, and the history and culture of Granada and the surrounding areas. It is also a great way to get to know other students from your Spanish course. All the excursions are lead by a teacher who is ready to answer any questions you may have about Granada and its history.

Live with a Spanish host family

You can live with Spanish families. This gives you the perfect opportunity to practice your Spanish and to study outside of class! Spanish families are carefully selected by us. Half board is included in price.

Our residence is situated 3.5 km from the center of Granada, with large gardens, gym, game rooms, and free Wi-Fi access.

All apartments have a lounge with TV, kitchenette, private toilet and 1 or 2 bedrooms.

Our location allows an easy access to the A-44. We are 5 minutes from the bus station with good connection to the city center.

You can share a flat with other students renting a single or double room. All the appartments have everything you´ll need. Fully-equipped kitchen, bathroom, washing machine, shared living room. Lots of the flats also have a terrace or a balcony. Bed linen is provided.

All facilities are modern and have good equipment. All rooms have flat screen TV, fridge, wardrobe, table and chair for studying, excellent bed (bed linen provided) 190 cm x 90 cm and the decor is in accordance with the modern style of Students XD. Also suites have beds 150 cm x 200 cm, but these have limited availability and at a higher price.

It has 4 floors which are suites and common areas, serviced by a lift and stairs.

Leisure facilities: in which you can enjoy your free time, 52-inch TV, digital TV, video games, board games, billiards, table football ...
Dining Area: Stands out due to its breadth and personality. It is located on the ground floor next to the reception area

Library: XD Students have a suitable library to read or study in silence
Classroom Study: Also in this building, we have a room where you can study with your classmates, group work interaction is allowed
Room Fitness: Students XD will also get fit with our cozy gym where you can do plenty of exercise to keep your figure in shape.
Laundry: With everything you need for washing
Common Kitchen: fully equipped, for the use of all residents for snacks or food in festive period
Parking: For cars and bikes with limited places, on a first come first serve basis.

Room Type: single or double for travellers together

Granada airport is 12km from the city centre. On arrival it is best to get a taxi from the airport so that you can get to your accommodation without walking through the streets with your luggage. The taxi costs about 28 euros.

There is also a bus which takes you to the centre of Granada. The bus times tie in with all the flights.

Getting to Granada by Train

The train station is fairly central and is in Avenida de Andaluces off Avenida de la constitución. The phone number is  958 271 272. Granada is not on a high speed line.

The Talgo takes about 5 and a half hours from Madrid. Seville is 4 hours by train. Most people choose the bus rather than the train when coming from Malaga or Almeria.

Getting to Granada by Bus

There are many buses each day to and from other large Spanish cities. To buy tickets online, visit ALSA. You can check times and prices and even choose your seats. The bus station is slightly out of town and you will need to get a taxi or a bus to get to the centre

From Madrid
If you are coming from Madrid or Malaga you will need to go to "Estación del Sur".

The bus company owns a cafe half way between Madrid and Granada where they sell overpriced dried up sandwiches and lukewarm coffee. If this is your first time in Spain don't get depressed, Spanish catering is not normally that bad.

From Málaga
Internet booking systems now function well so it is better to book seat online on ALSA, otherwise the normal procedure for getting a bus is to go to the station and get on the next available bus.